In January 1976 the Gazette carried an article with photograph reporting the success of the school's gymnastics team: 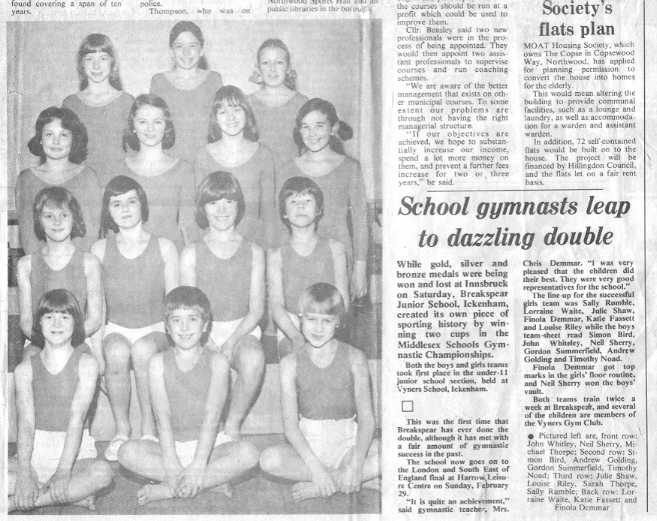 While gold, silver and bronze medals were being won and lost at Innsbruck on Saturday, Breakspear Junior School, Ickenham, created its own piece of sporting history by winning two cups in the Middlesex Schools Gymnastic Championships.

Both the boys and girls teams took first place in the under-11 junior school section, held at Vyners School, Ickenham.

This was the first time that Breakspear has ever done the double, although it has met with a fair amount of gymnastic success in the past.

The school now goes on to the London and South East of England final at Harrow Leisure Centre on Sunday, February 29.

"It is quite and achievement," said gymnastic teacher, Mrs. Chris Demmar. "I was very pleased that the children did their best. They were very good representatives for the school."

Both teams train twice a week at Breakspear, and several of the children are members of the Vyners Gym Club.

[Spelling and punctuation as in the Gazette]