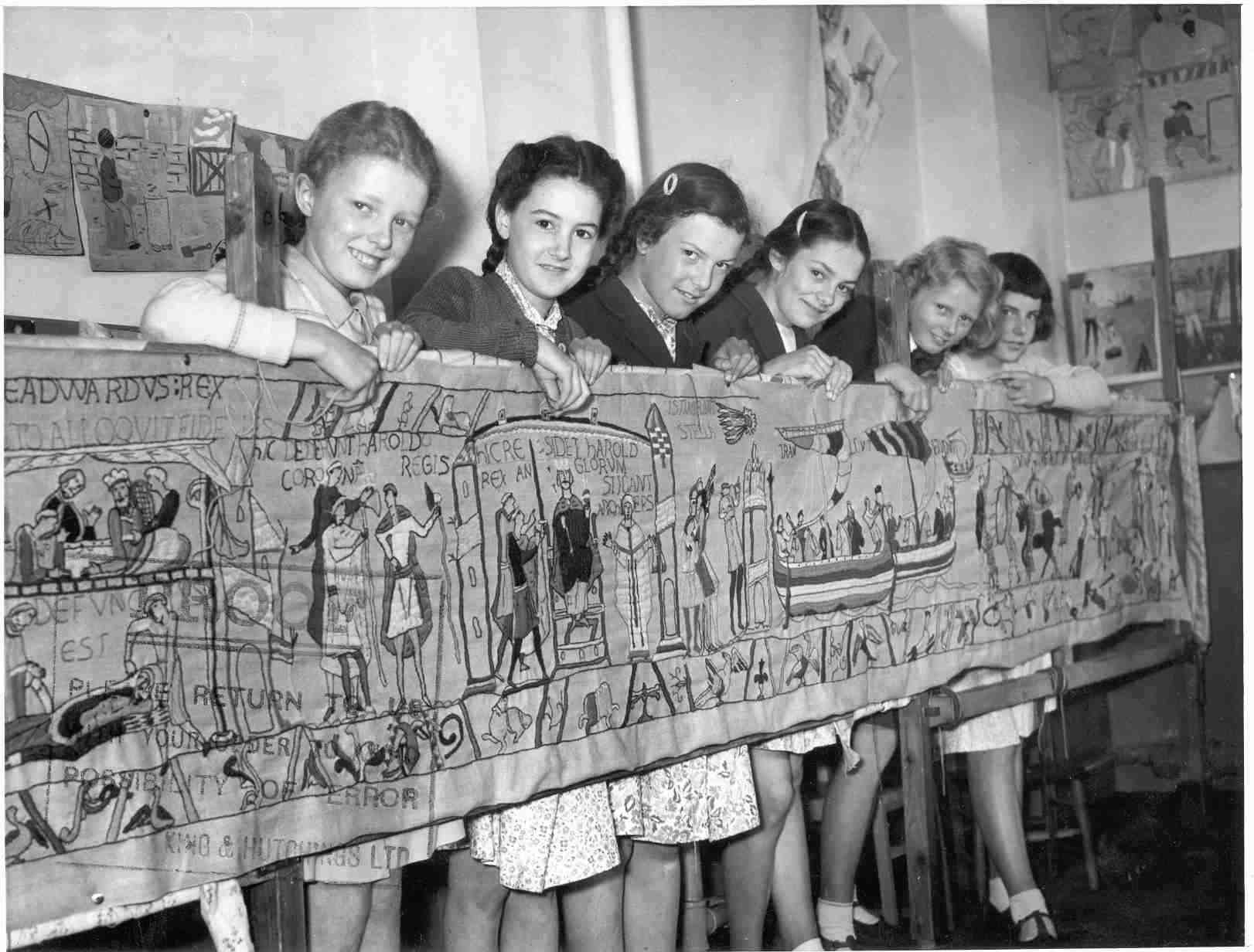 The copy of a section of the Bayeaux Tapestry made by these girls in 1952 has moved round the school over the years. It now hangs along the upstairs corridor.
The Gazette of Friday 6 June 1952 contained a picture of the tapestry and the following report:-

CHILDREN MAKE COPY OF AN ANCIENT TAPESTRY
Girls embroider historical record
One of the most valuable and important historical records in existence is the ancient Bayeaux Tapestry. The Victoria and Albert Museum has a painting of its 231-foot length, but the children of Breakspear Primary School, Ickenham, have gone one better. They have made a beautiful and absolutely accurate copy of sections of it.
The top class were studying the Norman period in English history, and Mr. Cheslyn, their master, thought that a copy of the tapestry would help them. With Mrs. Scott, the needlework teacher, he made detailed copies of six separate panels and transferred it to 18 feet of linen. They took hours doing this, as they distorted figures and shapes had to be copied exactly.
“We started in March and finished last week,” Mrs. Scott told an Advertiser-Gazette reporter, “but to tell the truth when we began we thought it would never get finished, because it looked such a formidable task.”
The length of linen was fixed on stands, and twenty 11-year-old girls worked on it together - sitting, standing, crouching, in all sorts of uncomfortable attitudes.

“We kept to the proper colours, shades of blue, red, green and yellow,” Mrs. Scott explained, “but the dyes of the original were not strong, and were rather dull. Our colours are much brighter, partly because I thought it would be more interesting for the children.”
As in the original, the colours are used quite arbitrarily, with green horses, blue-haired men and fantastically coloured birds and animals.
Made in the 11th Century, the tapestry illustrated the Norman invasion of England in 1066. The Ickenham one is a “cut down” version of it, and tells the tale from left to right - Edward the Confessor sends Harold to Normandy (he is robed in vivid green sitting in his castle, then a surprisingly futuristic tree, which is at Bosham, where Harold is seen setting out for Normandy complete with his hawks and weirdly coloured hounds.
A great deal of the original is then left out, and next comes the Palace. In the top story Edward, failing in health is being consoled by his counsellors and household. In the bottom storey he is dead. The next part shows the coronation of Harold at Westminster Abbey.

One of the most interesting parts of the whole tapestry comes next. Six men stand pointing up at a red comet flashing across the sky. This is the first known record of Halley’s comet.
Next are two beautifully embroidered sailing ships carrying soldiers and horses from Normandy.
Last comes the most well-remembered piece of English history - The Battle of Hastings, 1066. Harold is shown with an arrow in his eye.
The tapestry will be framed and hung in the school. Many historical experts are interested in it, and the Victoria and Albert museum say they know of no other copy in this country. 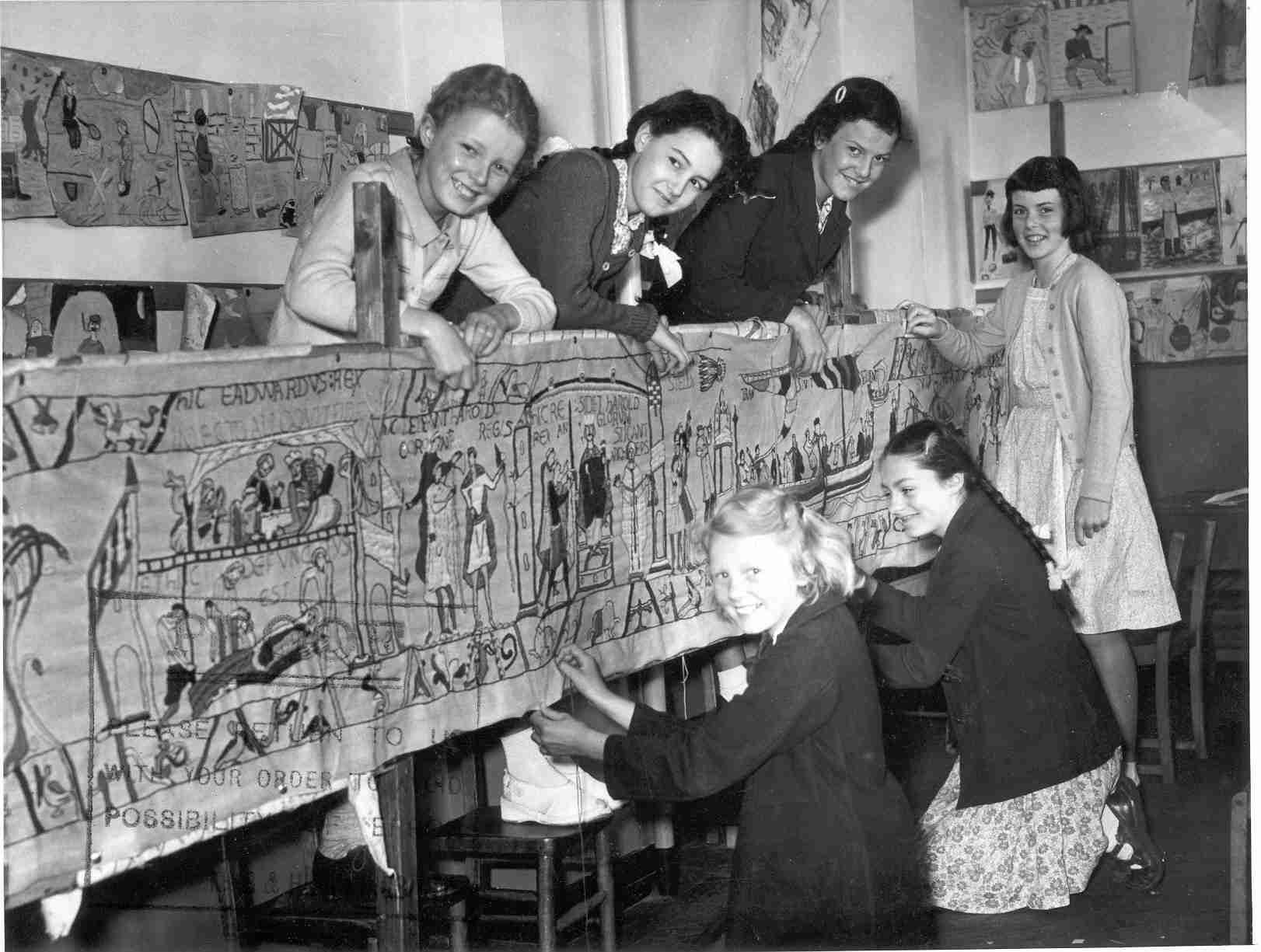 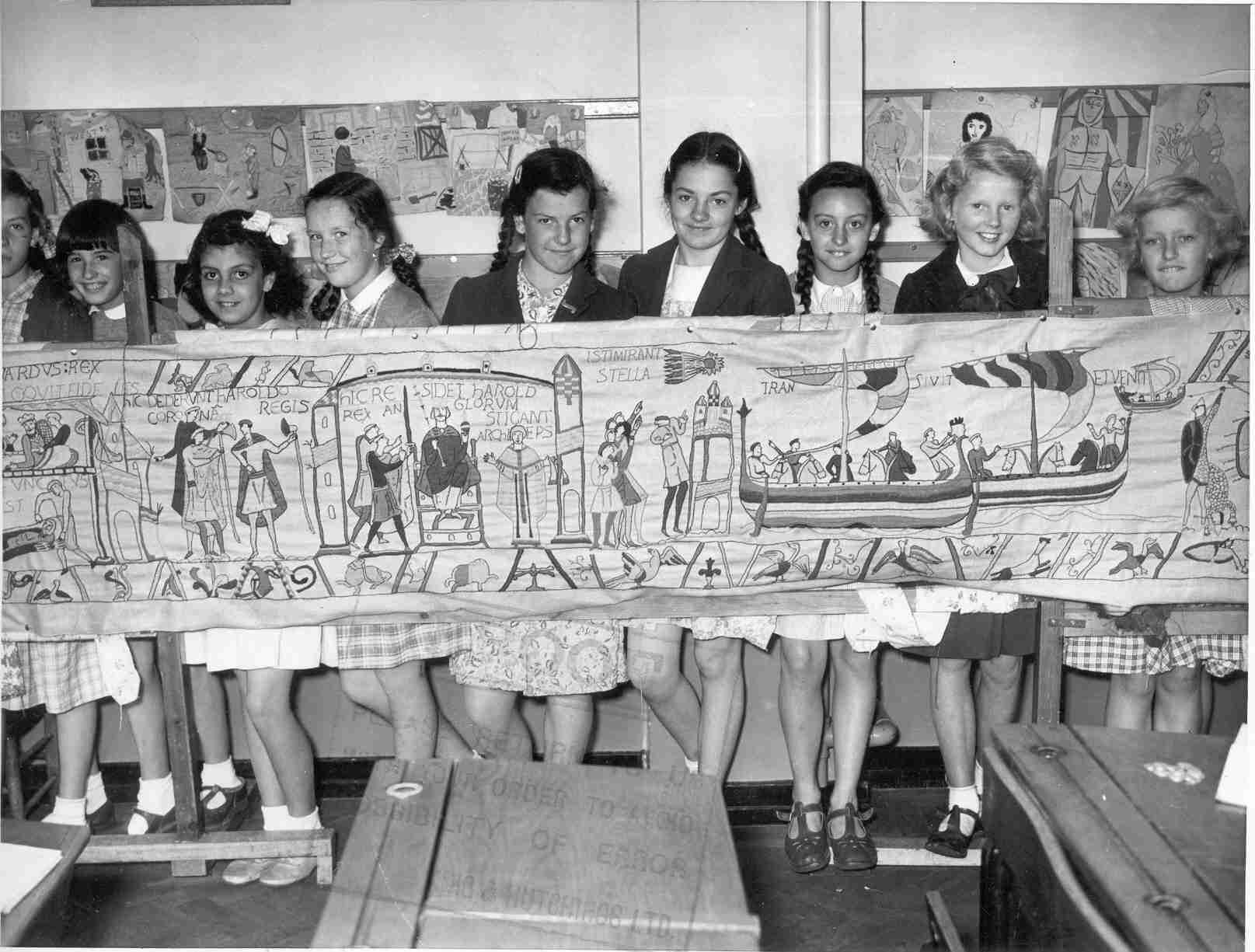 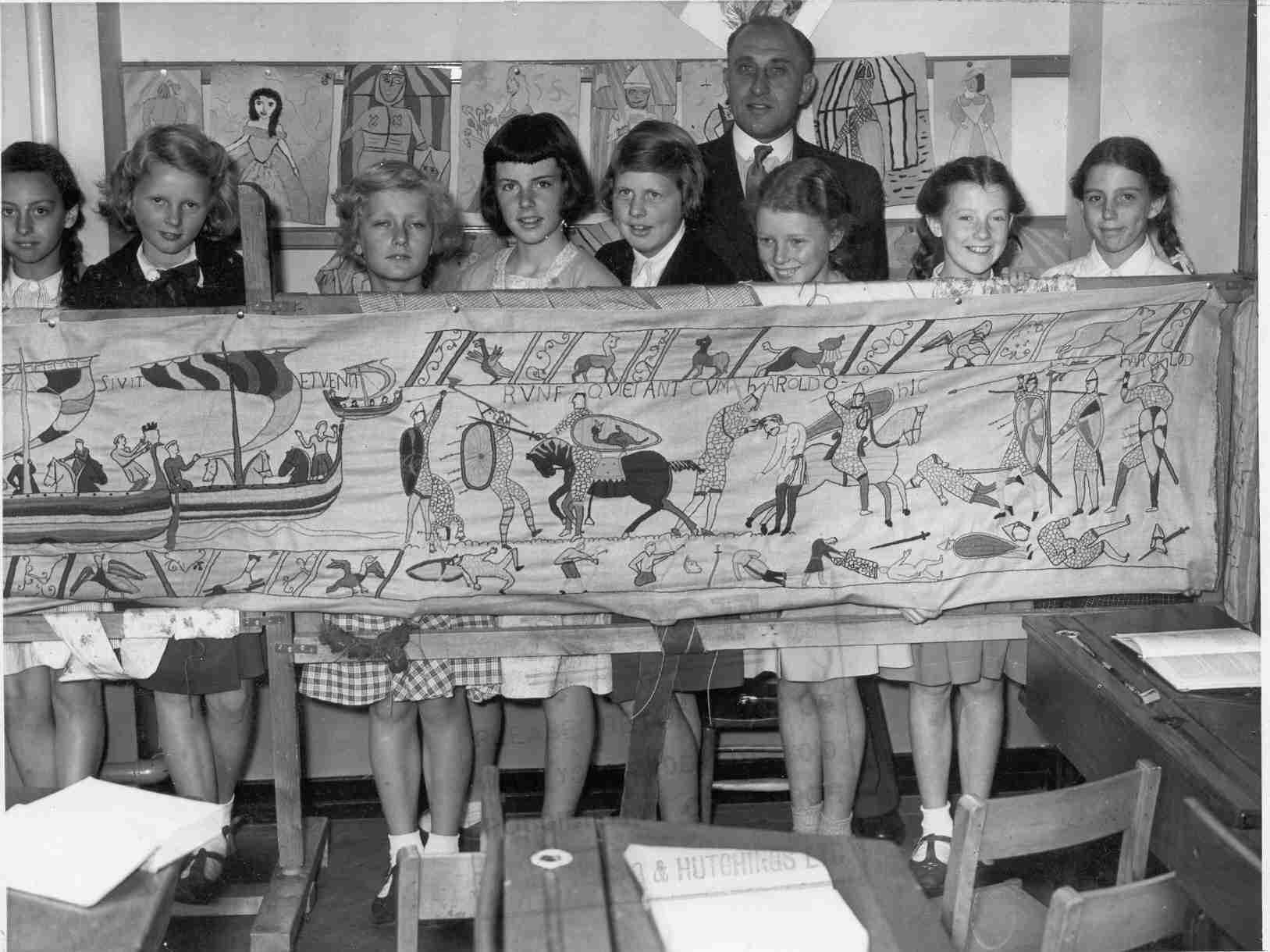 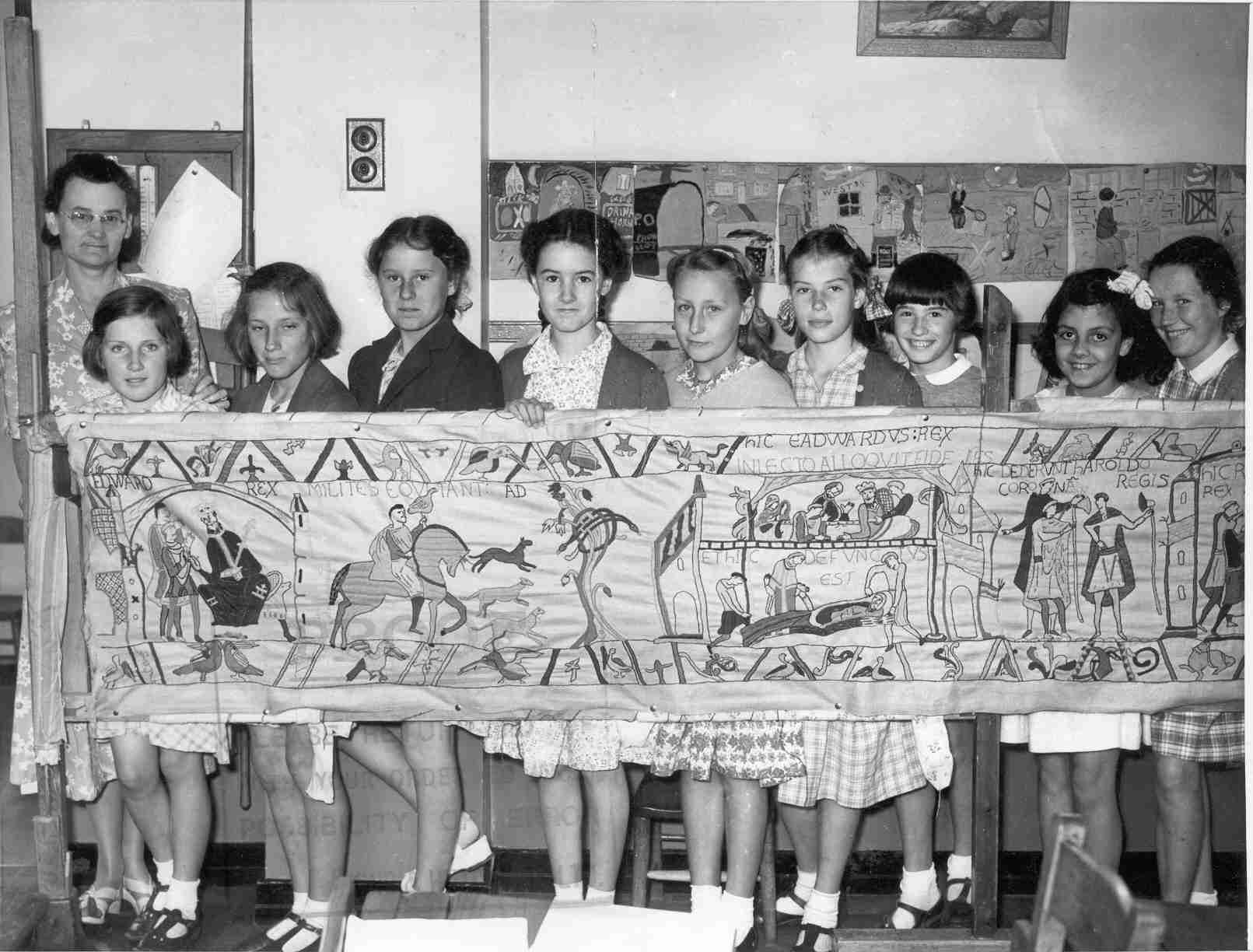